Yes, I am saying Google is a dinosaur when it comes to Office 2.0 applications. Zoho Sheet is better than Google Spreadsheet as I wrote in a previous entry. And now Zoho is launching Zoho Projects- a complete project management app for the 2.0 fanatics. 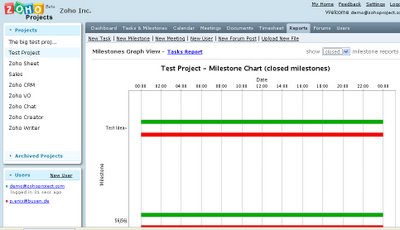 Some features I like:
– Integration with Calendar
– Easy to add tasks and to-do’s
– Reports including Gantt Charts
– Ability to attach project documents to the project

My feedback to Zoho team is to have a more carefully thought out demo scenario. To the new user, the demo and the product are indistinguishable- pick an interesting project (say “Launch Motorola RazR”), carefully think through the project and have a demo scenario everyone can relate to.

This is a good example of Enterprise 2.0 and as you will notice this app is just a Web2.0 app that happens to be targeted to the office user. In my previous post I argued that the whole Enterprise2.0 debate is a little misleading as it is mostly packaged app vendors looking for a veneer of Web2.0- a true Enterprise2.0 app is just another Web2.0 app. Do you agree?