Feedly today announced its launching Feedly Mini – a floating toolbar that shows up at the bottom of your web browser as you visit a website – and lets you engage in conversations via FriendFeed and Twitter. For those who don’t know what Feedly is – it combines the best of RSS Reader, a magazine-like interface (think Newsweek home page) and makes it come alive in the context of conversations via email, Twitter and Friendfeed.

Let’s take an example – reading the New York Times editorial page. While the New York Times has a comments section – those comments are from people that I don’t know and have no background on. Before Feedly Mini, I would have to post this on my Twitter page or FriendFeed to start a conversation with my friends – and do so manually. But with Feedly Mini, as shown below, a small non-intrusive toolbar floats up at the bottom of the page and in less than few clicks – I can discuss the bailout with my friends. 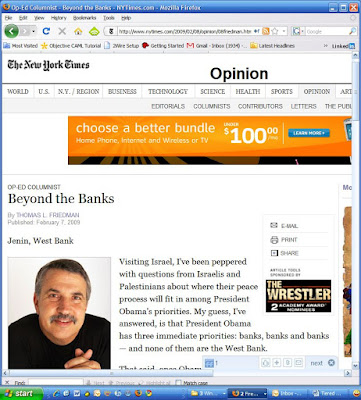 What does the Feedly Mini do?

One killer feature (shown below) is the ability to Tweet a blog post or web page directly from that page with less than 2 clicks. I simply click on the floating toolbar and add my comments and it shows up in my Twitter stream. Easy.

The other feature that I really like is the ability to see what people are saying on FriendFeed about the blog post you are reading (or a newspaper webpage – like a New York Times Editorial page) and to be able to join the conversation directly in-context (see below).

Summary
As the web goes from a publish subscribe (one-to-many) model to a conversational (many-to-many) style, tools like Feedly Mini will increasingly be important. Just as most of us no longer log into our computers or iPhones without turning Yahoo! or Google instant messaging on, the browsing of the internet will no longer be a lonely experience. You get to participate in a conversation in-context and with people that you are friends with. Of course, the term friend is loosely defined here. Very loosely. But that’s a topic for a future post.

Try Feedly Mini out, and let me know what you think. And remember, comments are to bloggers what flowers are to women!

Update 2: A commenter told me to forget about Twitter and focus on my day job. Here is a post on how Dell sold $1 Million worth of equipment via Twitter.